Went to the Gilbert Farmers Market today with the kids, my best food friend Eric and my sister and fam and it lived up to the hype! Had a blast! Enjoy this post from January.

Well, I finally got my Best Food Friend to do a write up on somewhere I have wanted to go for a while, and I think he has convinced me to drive all the way out to Gilbert! My sister lives in Queen Creek and we usually meet up and hang out at the Zoo, but this looks too good to pass up. I am sure Eric re-wrote this several times, thinking we would not enjoy his commentary, so if you like it, please comment and help me encourage him to write about more of the East side happenings. I think he did a fantastic job, and by the way I was a lot shocked. Thanks!!

Conference Calls To Meat Balls (CCTMB) creator, my friend Steph, asked me to possibly contribute to her blog about the Gilbert Farmers Market.  I am sure she will be medium-ly shocked that I actually did it.  For reasons unknown to me she thinks it may be interesting.  Here it goes.
Before moving to Arizona, 21 years ago, I spent the first 23 years of my life in Northeastern Illinois.  I was born in Chicago and and grew up about 30 miles north.  Chicagoans would consider this area “the Boonies”.  I didn’t fully grasp it while I lived there, but this area is one of the premier places on the planet for growing superior produce.  About 20 miles north of us was another Midwestern farm-centric powerhouse…. Wisconsin.  I had strong ties to both states.  In this part of the world there are farms, farms and then more farms.
My mom often bragged of the quality of soil that was specific to Illinois.  Generally called “Black Dirt”.  For the dorkier scientific gardening type blog readers out there, (AKA cool people) you can Google “Drummer Soil”.  My Mom was what I would call an early days “food adventurer” – not unlike the CCTMB blogger you read today.  There really weren’t a lot of food adventurer types back then.  My Mom was also a huge fan of vegetables.  She was lucky enough to have traveled a bit around the country before starting her family.  That translated into some decent knowledge of different regional veggie dishes.  As a kid it was not uncommon for my mom and I to eat roasted beets, braised red cabbage or whole green onions – raw with a little bit of salt.  A lot of them we even grew in our own garden.  When tomatoes were in season we ate them whenever we could.  We knew the season was short so we never grew tired of them.  One of our culinary highlights each year was the BLT.  Fresh Butternut white bread lightly toasted, crisp Oscar Meyer bacon, standard Iceberg lettuce & Hellmann’s mayonnaise.  The tomatoes were obviously the star of this sandwich.  Tomatoes that tasted like tomatoes to the third power.  Another of my all time favorite dishes was sautéed spinach with bacon and diced hard boiled egg.  I still often make the BLT and the spinach dish.
From late spring through early fall, farm stands were everywhere in Northern Illinois and we frequented them often.  Strawberries, green onions, cucumbers, green beans, sweet corn and of course, superb tomatoes were the things I remember most.  When October rolled around, that’s when we would go apple picking.  Then we waited again until next year.
Being in Arizona I feel lucky to have access to a lot of fresh local produce all year.  I’ve read that some of the chefs here in the Phoenix area feel the same way.  I am not above buying what is at the supermarket but buying it locally seems a bit more responsible.  Buying those veggies at a market can even be fun, and they seem to be of superior quality.  Today’s markets have some cool stuff in the them.  At the top of the list I would put THE FOOD TRUCKS!  For you loyal CCTMB readers out there you will know that THE FOOD TRUCKS play an important role in Steph’s “Lunch Game”.  I fully agree with that thinking and only wish I could frequent FTF (Food Truck Friday) more often.
I am lucky enough to live 3 miles from the Gilbert Farmers Market.  http://gilbertmarket.com. It occurs every Saturday from 7-11 in the summer and 8-12 in the winter.  I don’t have a good excuse as to why I have only been to it twice, but each time proved to be way worth it.  I plan on going more often and hitting all of the Food Trucks.  Maybe, just maybe, even the Vegetarian one.  Last week I went with my wife, Stacey and we had a fun time.  She was looking forward to going so she could wear a scarf I got her for Christmas.  The temps were in the upper 30’s when we arrived and “scarf season” in Gilbert is short.  Some folks in The Phoenix area would consider this weather to be BRUTALLY COLD.  I enjoy it immensely when it’s chilly.   Triple digits will be here soon enough so its a nice change of pace.  The market has a nice vibe to it.  People with dogs, people with kids and lots of free samples.  Last week there was an acoustic guitar player named Kaci Carpenter who solidly covered some Bob Marley, Adele & The Violent Femmes.  I thought she was excellent.
I also picked up a little quarterly magazine called Edible Phoenix while I was there. http://ediblephoenix.com.  It has a little pull out guide for the Phoenix restaurants that have a more local farm friendly menu.  It had a few recipes, a cookbook excerpt, a vintage apron piece and some info on some of the drink festivals coming up around the corner in 2013.  Such as: http://arizonabeerweek.com or http://arizonacocktailweek.com.   I think it’s worth a look online.

Photos and snippets below.  I can’t wait to go back this Saturday.  Maybe Steph & Angie will make it someday! 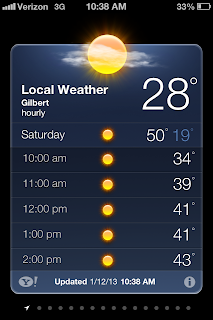 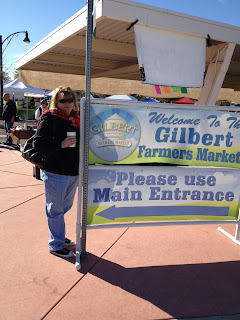 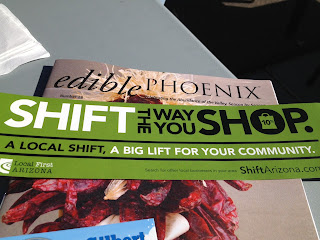 Food Truck & Food recap.  Island Loco.  Hawaiian Malasadas.  Light, airy, puffy donut balls sprinkled with sugar after being deep fried until golden brown.  A Hawaiian Classic and these proved to be the real deal.  One of my favorites. 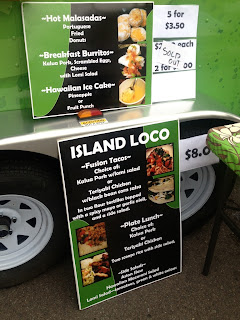 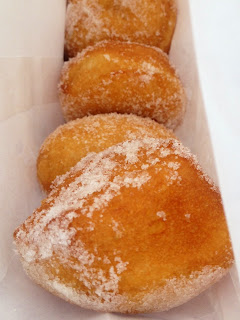 The Tamale Store.  Pork Tamale with red sauce and a really nice salsa.  It was really good. 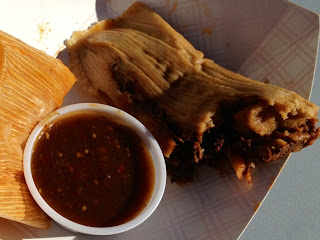 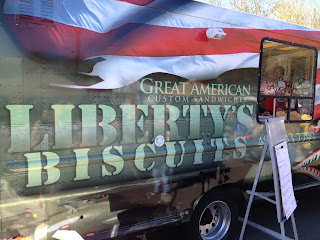 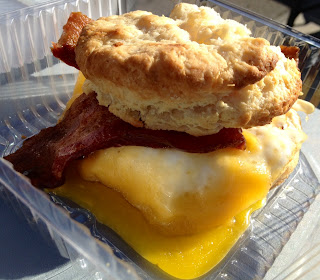 Another cool vendor was Go Lb. Salt.  Our friend Steve has a birthday around the corner so we
bought him a wood salt cellar and some gray salt.
http://blog.golbsalt.com/category/gilbert-farmers-market-2/ 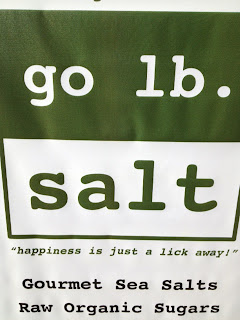 Here are the parsnips and brussell sprouts we bought from Desert Roots Farm grown in Queen Creek. 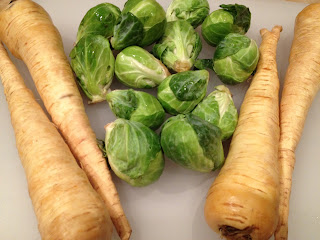 Here’s a sprout after getting the bacon and onion treatment. 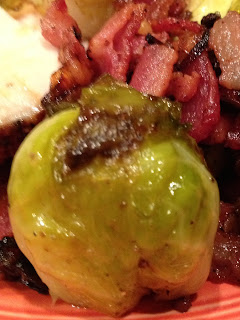 Here are the parsnips with a few carrots that I roasted in honey, a lot of black pepper, a few pinches of cayenne and butter. 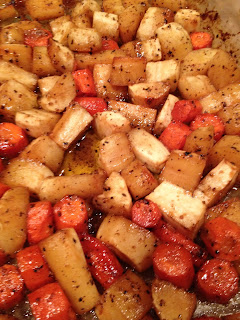 Some bread we bought from Mediterra Bakehouse, an olive loaf and a baguette. 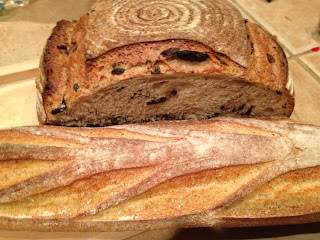 Fiscalini cheese out of Modesto Ca. has a booth there.  Not really local, but awesome.  The wrapped cheddar has won some awards.  We bought the 3 below and have not yet tried them.
Click on this if interested.  http://fiscalinicheese.homestead.com/2008-Newsletter/September/September_2008.pdf 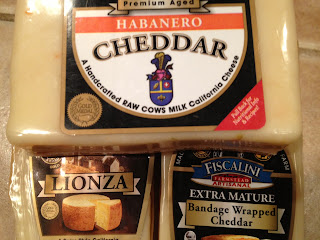 Guest Blogging from the East side~ Eric Lanenga