I am going to keep calling posts from my best food Friend Eric “guest posts” as he said he was probably not going to be able to commit to doing a co-blog when I first started. Initially we probably talked about drinks more than food. He was not sure if “my readers” would be interested in a booze post, and I assured him they/we would be. So let me know what you think. I think from time to time all parents just need a good drink!
Cocktails, Peaches, Bourbon & Bitters
Guest post by E
I have always been a fan of the cocktail.  Early memories include my Dad letting me try his whiskey sour every so often if we went out for a nice dinner.  Tanqueray & tonic with a lime at weddings when I was almost old enough.  Margarita’s with cheap tequila at Mexican restaurants when I actually was old enough.  Later in life I became decent at making them at home on my own.  Dirty Martinis with homemade blue cheese olives.  Pomegranate Martinis.  A large batch of Rum Punch for my Jerked Chicken.  Tequila Sunrise, Tequila Sunset.  Mai Tai, Margarita, Moscow Mule.  The list goes on.  I greatly enjoy making them for guests.  I ask them what they typically like and then try and make something they’ll enjoy.  I’m usually successful.

Over the last decade or so Bourbon has become the spirit that most interests me.  I still drink my share of Tequila and Vodka, but I’ve been enjoying Bourbon more & more.  The history of American Whiskey, the role it played with farmers & homesteaders in the late 1700’s, the huge impact it had on America in the 1800’s, whiskey as currency, the amount of tax dollars it created for the Federal Government and then when that revenue stream dried up with Prohibition, Moonshine, and then how the markets were re-established after Prohibition is all fascinating to me.  Another interesting Bourbon fact includes Congress declaring Bourbon “America’s Native Spirit” in 1964.  Also, to be even geekier, the specific geology of Central Kentucky with its limestone shelf and a four season climate, make this region home to practically all Bourbon distilling in the world.  Almost all of the most popular brands of Bourbon offer tours and tastings.  I have not yet been to Kentucky to see and sample The Bourbon Trail, but it’s at the top of my list and I hope to take a trip there this fall.

http://kybourbontrail.com
When I first got ordered my Kentucky Bourbon Cocktail book a few months back, there was a recipe I knew I was going to try.  I think I am one of the few people left who orders cookbooks or books with drink recipes in them.  The internet is obviously a vast resource but there is still something I find appealing to have a book in my hands.  With the recipe in my skull for a few months it became time to execute.  I went to the Gilbert Farmers Market weekend before last to get some locally grown peaches.  They were sold out and I overheard the gal say to someone else who was looking for peaches, “You have to get here pretty early to get those”.  Armed with that valuable info I got to the market this weekend at 7:00am sharp, on a SATURDAY.  I didn’t even need to set my alarm.  How old am I getting????  OLD.  I’m so old I’m writing content for my friend’s busy Mom/quick and tasty family meals blog about infused booze and cocktails.  So…I bought 16 peaches that netted out at $17.  A majority of them were going to be used for the recipe – Peach Bourbon.  This will steep for 3-4 days and then I will strain it and put it in the bottles I have. 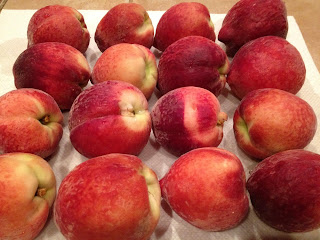 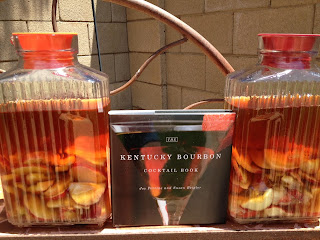 I am not sure how long it’s been underway, it depends on where you live and how frequently you drink or seek out cocktails.  For me, that’s pretty often.  Over the last decade and change, the trend continues to be one that creates craftier & craftier cocktails.  Infused spirits, specially flavored bitters, flavored vodkas & rums, obscure liqueurs, sugar syrups, instant freshly squeezed citrus, fresh fruits, herbs like mint or basil being muddled, an assortment of spices, egg whites, maple syrup, infused cherries, different salts and sugars, vermouths, teas, different shaped ice cubes, classic style Bourbon drinks, Rye whiskey, old school Prohibition style cocktails, a Tiki drink revival, vast choices of Mojitos.  Cucumber Mojito or the Cucumber Cilantro Margarita?  Rob Roy or a Grasshopper?  Sazeracs and Absinthe.  Huckleberry Vodka and Sprite Zero?  Check.  The list goes on and on.  In some circles they refer to this as “Mixology or Mixologists”.   I prefer cocktails and/or drinks and Bartenders.  It’s pretty easy to spend a lot of cash on just a few ingredients to try and duplicate cocktails at home.  Make sure before you buy the $35 bottle of St. Germain, the sweet liqueur from elderberry flowers with flavors that sort of taste like grapefruit & maybe peach and pear too, that you’re actually going to use it.  I do have St. Germain but at least it was given to me as a gift!  The equipment is fun too.  Different glasses, muddlers, strainers & shakers.
This past Friday I filled my need to spend money on booze and booze related stuff with a trip to Sun Devil Liquors in Mesa.  It’s about 5 miles from work so it’s easy to hit at lunch.  I saw lots of run on FB over the last few weeks with the local folks at AZ Bitters Lab and the news was that their products were now being sold at Sun Devil Liquors & their sister store Tops Liquors in Tempe, excited me.  A 4 oz. bottle will cost you $19.61 with tax so be aware if you’re interested.  I was lucky enough to have already sampled their Figgy Pudding Bitters a couple times at Vintage 95 in Downtown Chandler.  Vintage 95 Bartenders Dan and Jason have fully embraced this craft cocktail business and make delicious drinks.  Dan made a Manhattan for me with Figgy Pudding Bitters and somehow I knew, someday, I would own them.  The AZ Bitters team gave them some samples prior to having their sales avenues firmly established.  Obviously it worked with me since I’m talking about it 6 months later.  I tried the Figgy Pudding Bitters this weekend in a Manhattan.  They add something different in terms of flavor and depth that’s hard to duplicate any other way. The history and role of bitters in health & medicine, and cocktails is another entire thing in itself.  I’ll spare the audience that rant, as that was the last book I read, but it’s safe to say, booze nerds everywhere are rejoicing at the bitters that are now available to the consumer and the more interesting bars.  I think it’s even cooler that AZ Bitters Lab is here locally.  Their 3 flavors are Figgy Pudding, Mas Mole, and Orange Sunshine.  They can be checked out at http://azbitterslab.com 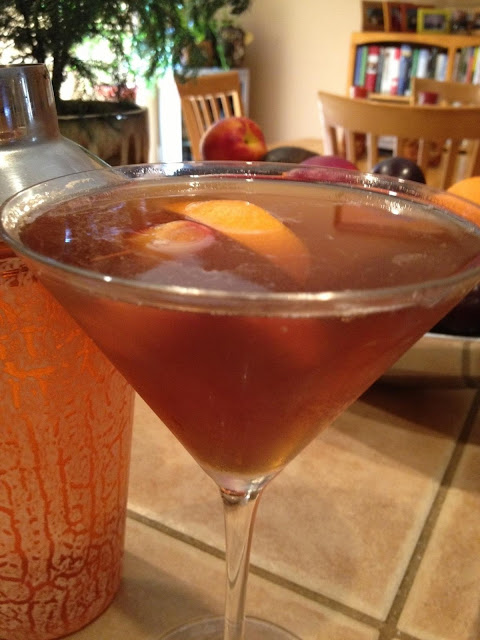