Spaghetti Squash with Browned Butter and Goat Cheese
As I have said, I have become obsessed with other Blog’s, there are so many great ones out there to read. Typically I check Twitter to find little blurbs that get me interested, and then dig in deeper on that persons Blog, Facebook or website. This has led me on so many educational journey’s and “met” in the virtual sense a lot of really interesting people. A couple weeks back I stumbled upon a tweet from @ThatSkinnyChick, with a link, she usually posts some good stuff, so of course I checked it out. The Recipe was from a blog called Treats & Trinkets, called Spaghetti Squash with Brown Butter and Goat Cheese. I thought for sure it was divine intervention because I had just picked up a Spaghetti Squash at the grocery store and had not yet decided what to do with it. With that one I made just plain old Spaghetti just because those were the ingredients I had in the house at the time to go along with it, but I knew soon, I would run out and grab the ingredients to make this dish. I tweeted them both letting them know that I was going to make it and Kim from @TreatsTrinkets tweeted me back to let her know how it turned out. I have a couple of admissions before I continue, for starters, I had no idea that you could just go on into the store and grab some goat cheese, I was amazed at that. Then because I already made a dish with bacon this week I wanted to make this with chicken instead. I know, I know, I LOVE bacon, I just cannot become “That Guy” and start eating bacon twice a week. It’s just not going to happen unless absolutely necessary or I am under duress. So I pretty much followed the recipe that as she stated EXCEPT, I chopped up some chicken breasts, cooked them in butter and the herbs she mentions, but I did not have any sage. Also I have some chives growing so I chopped those up for the garnish. I also may have used a little more cheese than she did, I love cheese. This was so delicious, creamy and gooey just like she said. The chicken in it turned out great, but I can see how the fatty and salty crispness of bacon would compliment all the other flavors. I included the link to her recipe so you can check it out. The next recipe of hers I am for sure going to try is her Open-faced Balsamic Chicken and Goat Cheese Sandwich, it sounds & looks fantastic!!
Below her link are my pictures of how I made the dish.

The family verdict: I loved it, teenage daughter could not be bothered to eat it at the moment, promised she would have some later, youngest son loved it, neighbor kid loved it and my eight year old did not want to taste it because he said it looks weird. (He has not been like that in a long time, which was odd) The husband, he likes everything, so of course he chowed it down.

You know what I think it is that I love about the bloggers, they are all so engaged. You can ask question, post compliments, get feedback and they have been a very helpful and supportive community to me on this Journey. You cannot just crack open a recipe book and get that kind of real time feedback. Plus you usually get a good story. 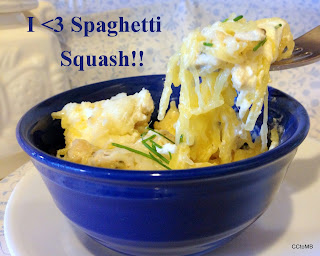 Easily peels away with a fork

Ready to go in the oven

2 comments for “Spaghetti Squash with Browned Butter and Goat Cheese”